When Christian Science found me I was so miserable that I did not want to live; yet I was afraid to die, because I believed that sinners go to hell. My first healing was that of eye trouble and came through the impersonal realization of man's perfection on the part of one of the students of Christian Science in whose home I was staying. The next difficulty overcome was that of nosebleed, a condition which had held me in bondage all of my life. The same student of Christian Science did prayerful work for me, and my freedom came immediately. There followed a healing of blood poisoning also through the help of this student.

Later I began to study Christian Science and was freed from periodic headaches, from which I had suffered since childhood. This freedom came through gratitude for my previous healings. A number of years ago I was healed of neuritis. Later, deafness, which suddenly attacked me one night, was instantaneously overcome through the help of a loving practitioner. There have been many other physical healings during the years, as well as healings of resentment, hate, and other unlovely traits of character. I am very grateful for all of them, for they came entirely through the understanding and application of Christian Science.

Send a comment to the editors
NEXT IN THIS ISSUE
Testimony of Healing
While I was visiting at my sister's... 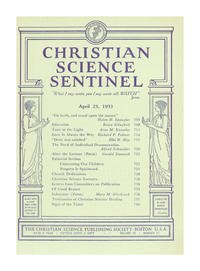