In the Psalms we read (8:4–6): "What is man, that thou art mindful of him? and the son of man, that thou visitest him? For thou hast made him a little lower than the angels, and hast crowned him with glory and honour. Thou madest him to have dominion over the works of thy hands; thou hast put all things under his feet."

The Hebrew poet, pondering the deep question of God and man, perceives the purified human concept as a "little lower than the angels" (according to the American Standard Version, a "little lower than God"), crowned "with glory and honour." The Psalmist's description calls to thought that sinless state of human consciousness to which our Leader, Mary Baker Eddy, refers in her definition of "Euphrates" (Science and Health with Key to the Scriptures, p. 585) as, "a state of mortal thought, the only error of which is limitation." 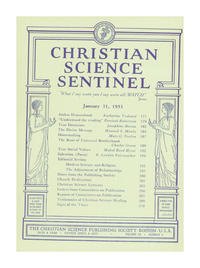