When I was still attending school...

When I was still attending school Christian Science was first brought to my attention. It seemed quite clear to me then that at lat I had found a religion which I could accept and practice. However, instead of accepting it, I sought happiness and joy in material ways. Not until years later, while I was in the armed forces, did I finally reach the end of the road in my search for happiness and peace in materiality.

One Easter Sunday I planned to go to the service held by the Christian Science Society in the town near the camp in which I was stationed. I did not get ready in time, however, and hence missed the service. As the day passed I felt quite strongly that something was definitely lacking and was very much disturbed over the fact that I had not attended the service.

Send a comment to the editors
NEXT IN THIS ISSUE
Testimony of Healing
I am grateful for Christian Science... 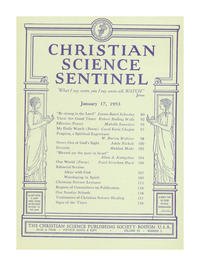