Immediately after I was released...

Immediately after I was released from the Marine Corps, in which I had served during World War II, Christian Science was presented to me by a friend who had just taken up its study. My first reaction was that my friend would lose all her sense of humor and be taken out of this world, so to speak. After a few hours of arguing, however, the desire to visit her practitioner came to me. The practitioner explained the Science of this religion briefly, and I could see that Christian Science was a religion of joy and spontaneity, whereas I had considered my orthodox religion rather dull and uninteresting.

I knew that Christian Scientists do not use material medicine, and that night I threw away my varied assortment of medicines. The next morning I awakened completely healed of a very serious rash which had persisted for several weeks and for which I had used many prescribed salves, with no success. The next few days I was so happy that I seemed to be walking on air, and within ten days I noticed all desire for smoking had left me, whereas I used to smoke a pipe, a cigar, and about a pack of cigarettes a day. 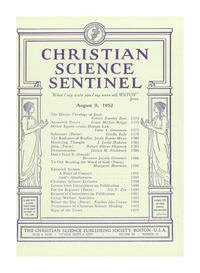