Men are awakening, however slowly, to the fact that there is but one real government, the government of God. Improved systems of human government and broader unification of peoples evidence this awakening. Laws designed to protect the lives and rights of individual citizens give assurance that many nations are drawing nearer the universal control of divine law. Mary Baker Eddy, who discovered the law of God and named it Christian Science, says in "The First Church of Christ, Scientist, and Miscellany" (p. 278), "To coincide with God's government is the proper incentive to the action of all nations."

Christian Science does not seek to abolish human governments but to improve them. It reveals the real spiritual universe, the kingdom of heaven, where divine Mind is seen to be one and infinite and forever in control of all that really exists. This kingdom may seem visionary to those who believe the confused material sense of life to be real, but it is not so to those who discern Spirit's allness and place themselves under God's government by obeying His laws. 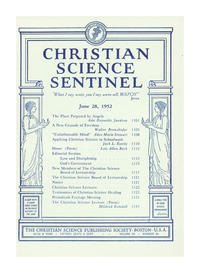