Christ Jesus came to save and heal mankind, to restore that which was lost, and to bring again that which was driven away. His mission was redemptive. He imparted his teachings in simple terms, which were easily understood by the common people. His familiar method was by means of the parable. When the publicans and sinners came to hear him and the Pharisees murmured because he received them, Jesus narrated three parables to illustrate the way in which redemption takes place. 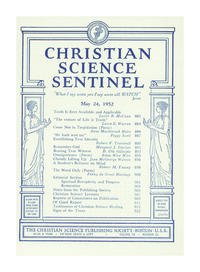