Enid Mary Slabbert with contributions from Louis A. F. Slabbert

I first became interested in Christian Science through attending a lecture. At that time I was suffering from tuberculosis of the throat, and my husband had just taken a transfer to a new location with the hope that my health would improve. The day after the lecture I made an appointment with a practitioner and asked for treatment, which was lovingly given. My throat cleared quite quickly, and gradually my voice became stronger until I could speak over the telephone and join in singing quite normally, which at first I was unable to do. The tubercular condition of the throat entirely yielded.

During the births of our three children I had Christian Science treatment, and the experiences were all harmonious ones. Our children have been healed of measles, whooping cough, croup, and rheumatic fever.

Send a comment to the editors
NEXT IN THIS ISSUE
Testimony of Healing
I shall always be grateful for my... 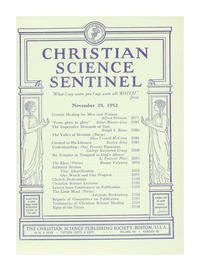