While I was lunching with a...

While I was lunching with a friend one day, he noticed from my careful selection of food that I was on a diet, and I told him that I was suffering from a stomach difficulty. He said: "You don't need to be a slave to diet. I should like you to meet a friend of mine who can help you." Asking no questions, I welcomed his kindly thought and decided to visit his friend. When I arrived at the designated place, I found that this friend was a Christian Science practitioner. Even then I did not know what sort of help I was to receive, because I knew nothing of Christian Science, and my friend had not mentioned anything about it.

In the hour that followed, this practitioner became my friend as well, for he introduced me to Christian Science. He told me to eat normally, just as if I had never heard of stomach trouble. I cheerfully did this, and to my surprise there were no ill effects; but quite the contrary, for I never felt better in my life. The stomach trouble was healed, and the healing has been permanent.

Send a comment to the editors
NEXT IN THIS ISSUE
Testimony of Healing
I should like to express my deep... 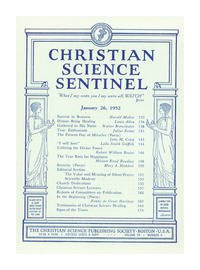