Christian Science healed me of a...

Christian Science healed me of a stomach ailment, which had made me weak and sickly, more than forty years ago, when I was a boy in my teens. I was often confined to my bed and was kept out of school much of the time. It was during an attack of unusual severity that Christian Science was brought into our home and some of its teachings were explained to me. I eagerly accepted them as true and dropped the medical treatment I was having. I was quickly healed of that ailment. I then took up the study of Christian Science and rapidly grew robust and strong.

As the result of my frequent absences from school my education had been retarded, and I found myself nearing manhood woefully lacking in many things. My sincere efforts to progress and know more of God and man as taught in Christian Science led me step by step into lines of work and study perhaps strange for one who had been seemingly handicapped. However, this guidance culminated in my becoming registered in two branches of engineering in a state requiring such registration.

Send a comment to the editors
NEXT IN THIS ISSUE
Testimony of Healing
My interest in Christian Science... 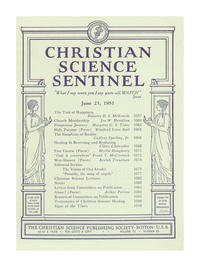