Man's completeness is a fact now. "Man is the climax of creation; and God is not without an ever-present witness, testifying of Himself," writes our Leader, Mary Baker Eddy, in "No and Yes" (p. 17). Being "the climax of creation" is not a future destiny for man made in God's image and likeness. It is man's birthright, something already and eternally his. Thus man has inherited the noble assignment of testifying to God's wondrous glory. A reflection naturally reflects the original without struggle. Standing before a mirror, one does not see an unfinished image, which will eventually be like the original. The mirrored image is a complete reflection now. On the other hand, the mirrored image has no initiative, power, or intelligence of its own, but is completely dependent on the original for existing. So it is with man, who can do nothing of himself, but lives and moves at God's directing.

The Scripture declares positively that God's creation is complete: "Thus the heavens and the earth were finished, and all the host of them" (Gen. 2:1). This divine fact cannot be reversed by material sense. Let us consider as an illustration the Old Testament account of the dividing of the Red Sea. Inspired by Mind, God, Moses proved man's dominion. The testimony of the material senses was arguing for hopelessness, lack, and danger. But the great Lawgiver turned to God; and as "an ever-present witness" of God's preserving power he led his people to safety. It was spiritual strength alone which enabled him to reassure his people with Love's angel message, "Fear ye not, stand still, and see the salvation of the Lord, which he will shew to you to day" (Ex. 14:13). 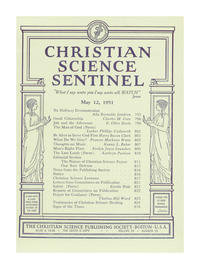