A Perpetual spring which flows from an estimated depth of twelve hundred feet keeps an old colonial home supplied with fresh cold water. Though the spring is piped to the house, it also supplies a bubbling stream about fifty feet away from it. Here during warm summer evenings the head of the house likes to sit. He likes to drink of the water as it flows from the ground and, as he says, to listen to its voice.

One day the stream outside the house was no more than a trickle. The strong pressure within continued, however, indicating that nothing was basically wrong at its source. The home owner thought that if he took away some leaves, the water would start flowing again. But after clearing away the surface impediments, he found that the flow was still sluggish. A neighbor who was a seasoned hand at such things was called in. He asked, "Did you dig around the mouth?" 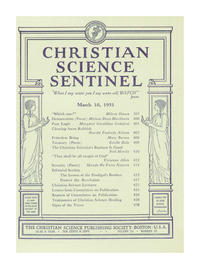