Even though my mother saw to...

Even though my mother saw to it that I had the usual childhood church associations, for fifteen years after I came out of Sunday School my life was spent in worldliness, packed with hardship and frustration, and I was even faced with a future of uncertainty Early in 1944, after four years of active service in the armed forces, I was close to physical exhaustion. My eyesight and hearing were impaired, and I was sublet to fevers and suffering from a skin disease. I was most outspokenly critical of all the forms of religion I had ever come in contact with, and I had forgotten how to express joy.

I knew nothing of Christian Science apart from the name. At this time my fiancée, who was interested in Christian Science, started enclosing pages of The Christian Science Journal, mostly testimonies of healing, in her letters. At first I resented this, but I kept the literature and gradually began to read and reread it with ever-increasing interest. It was not long before I realized that God has all power and that according to one's understanding is this made manifest in his experience. The pamphlet entitled "God's Law of Adjustment and Other Articles," which is published by The Christian Science Publishing Society, helped to convince me of this truth. Shortly, the Bible and the textbook, Science and Health by Mrs. Eddy, were sent to me, and I began to read in earnest. I studied the chapter on Prayer in the textbook for some time, because it seemed to be all I was able to assimilate at first.

Send a comment to the editors
NEXT IN THIS ISSUE
Testimony of Healing
For many years I have enjoyed... 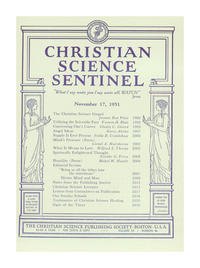