WHAT ARE WE BEHOLDING?

The writer read a short story the other day about a girl who on her way to the office each day studied the people around her in the bus and train with the object of giving a good imitation of them to her colleagues. She spent her time mentally rehearsing the amusing descriptions she would later give of all these people. But one day an unusual thing happened. One person, on getting out, caught her eye and gave her a sweet, serene little smile. When she turned again to the study of her fellow passengers, in some way they appeared to be different. Gradually she realized that the change was in herself, in the way she was looking at them. They had ceased to be objects of fun, for she was seeing them in a new light.

To her imagination the old woman was no longer a collection of odd garments, but she was as her son had seen her when, as a little boy waking from a bad dream, she had come to him bringing comfort, courage, and peace. The little birdlike man who had seemed so amusing to her a short while ago she saw as his family saw him, selfless in his care of them. As she looked around the bus, she realized that none of the people were any longer subjects for the exercise of her renowned sense of humor. They were not ridiculous any more. She was seeing them through the eyes of those who loved them best. 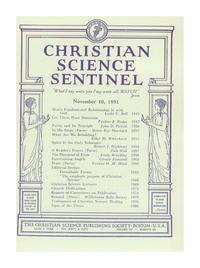