ONE day while busy in her home a student of Christian Science heard a peculiar fluttering noise at her back door. Upon investigation she found that a swallow had come into the basement through the garage and was frantically beating its wings against the screen door. Wishing to free the bird without frightening him any further, the student took a long pole and very slowly pushed the door wide open. But the bird continued to beat his wings against the screen, not realizing that he was free. Suddenly he looked up, saw the clear sky overhead, and darted away.

As the Scientist went on with her work, she began to draw some valuable lessons from this little incident. In her study of Christian Science, the revelation of Truth given to this age by Mary Baker Eddy, she had learned that gates hitherto closed to humanity had been flung wide open. Once she had considered man a material organism, subject to all manner of sickness and sins, born into matter and doomed to die out of matter. Now she had a new basis of thinking in her knowledge that man is the image of his Maker, the reflection of God; that he has existed forever as idea in Mind, not matter. Through this glimpse of absolute Truth and the faithful application of it, the student found herself being healed of many inharmonious conditions, both physical and mental. In the textbook, "Science and Health with Key to the Scriptures," our Leader, Mrs. Eddy, asks this question (p. 535): "When will man pass through the open gate of Christian Science into the heaven of Soul,into the heritage of the first born among men?" And she adds, "Truth is indeed 'the way.' " 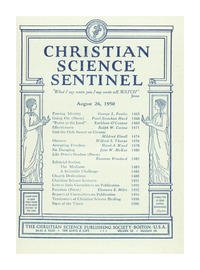