I wish to express my gratitude for Christian Science, which has helped me ever since my birth. When I was still too young to remember, I was healed of a number of difficulties such as mumps, burns, and an intestinal disorder. These were all instantaneous healings.

One night some time ago when the streets and sidewalks were covered with ice, I was out with my father and concerned with his safety on the ice, though feeling quite sure of myself. Instead of declaring the truth about man, I was thinking of impending danger. When we were within two blocks of our house, a large, smooth limb fell out of a high tree from a considerable height and struck me on the head, making a large dent. It hit me with such force that it knocked me down, causing my left shoulder to strike the pavement.

Send a comment to the editors
NEXT IN THIS ISSUE
Testimony of Healing
"O give thanks unto the Lord;... 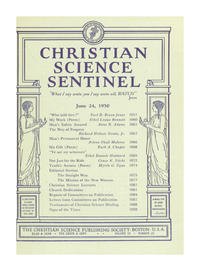