GETTING THE SECOND WIND

An experienced long-distance runner knows that if he conquers an acute sense of fatigue in the early stages of a long-distance race, he can go on for many more minutes and finally finish the race. The overcoming of that sudden feeling of exhaustion is called in athletic circles "getting the second wind."

This may serve as a helpful illustration to any student of Christian Science. The awakening of an individual from a false, material sense of existence with its fears, disappointments, pains, and sorrows to the recognition of a spiritual sense of Life, where health, holiness, joy, satisfaction, peace, freedom, and immortality are everlastingly established, is in many instances a sudden one. The illumination of one's consciousness with the spiritual facts of Life may be likened to the overwhelming influx of Christ, or Truth, in the minds of Jesus' disciples in the early days of Christianity, on the Pentecostal Day in Jerusalem. It may lift one to a sudden overwhelming vision of the realm of the real. It may for a time carry one measurably above the material sense of things. 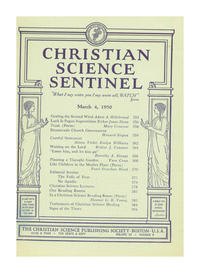