True Christmas giving, like everything else good and true, begins with God, for it is a reminder of His giving of the Christ to mankind. God's gift of the Christ, which reveals the truth concerning Himself, man, and the universe, has been received by humanity through the ages in the measure that human consciousness has been pure enough to receive the revelation. Thus the consciousness of the Virgin Mary was pure enough to conceive the Christ-idea and reveal it. Jesus was immaculately conceived. He presented the fullest and highest human concept of the Christ, the divine idea, healing, redeeming, and supplying all the needs of mankind. Could there be a greater gift?

The three Wisemen, because they had learned to cultivate and obey heavenly intuitions, followed the guiding star to the babe in the manger. To him they brought their Christmas gifts, costly gifts of gold, frankincense, and myrrh. These gifts symbolized the spiritual qualities which prompted their giving. The Popular and Critical Bible Encyclopaedia states that gold "is often employed in Scriptures as an emblem of what is divine, pure, solid, ... and capable of enduring a trial." Frankincense, it states, is "sweet incense—figuratively employed to represent lovely and agreeable qualities and devotional fervor," and myrrh is described as "an ingredient of the holy ointment," a preserving substance. 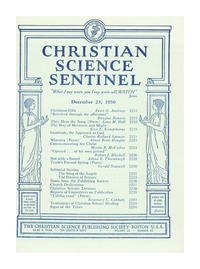