Early Christian social thought declares love as the new note that is to reform the world. ... Love received the most perfect human expression in the personality and life of Jesus, who came not for self-glory but to save people from hate and sin; who sought not the sheep in order to oppress and slay them for his own gratification, but to direct them, when lost, back to safe living; who sought not to weigh down the burdened with unjust taxes and harsh living conditions, but to relieve and give rest to the heavy-laden. ... 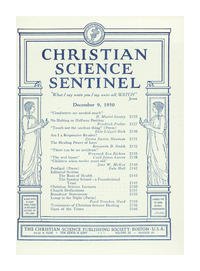