Since my early childhood, when...

Since my early childhood, when my mother first learned of Christian Science, I have known the priceless blessings of this God-inspired religion.

I was once healed of what probably would have been diagnosed as poisoning, where the evidence before the material senses was terrifying. The condition yielded in a few days with the help of a Christian Science practitioner. A sunburn so severe that a relative we were visiting predicted it would prove fatal was healed in a few days after I realized that it is false belief which claims the sun, or anything else, is both good and bad. "Doth a fountain send forth at the same place sweet water and bitter?" (James 3:11.) A First Reader in a branch church gave me one treatment in this case.

Send a comment to the editors
NEXT IN THIS ISSUE
Testimony of Healing
Over twenty years ago my testimony... 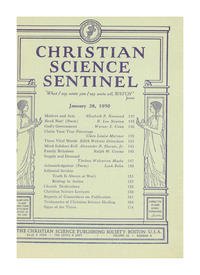