No futile tilting at windmills, but proving the foe is unreal

"Freedom from fear" is one of the four great freedoms for which modern democracy is working. The thought of fear as a number one enemy, however, is not a new one. A sand painting, sacred to the primitive religion of the Navajo Indians, depicts in colorful artistry the story of Nayenezgani, "The-man-who-killed-fear." This legendary hero, a great war god and knight errant, is said to have slain monsters and even "fear" itself. The latter he pursued through twelve worlds and met in every imaginable form. Bacon once wrote, "Nothing is to be feared but fear," a thought which has been expressed by others in similar statements. Fear is thus considered to be a major foe of humanity. Our task, therefore, is to overcome fear.

Christian Science, discovered in 1866 by Mary Baker Eddy, offers a proved method of destroying fear. Navenezgani pursued fear through twelve worlds. Psychologists and psychiatrists follow fear through the mazes of the human mind in an effort to annihilate it. Christian Science, the true psychology, reveals God as the only Mind, the only creator, the one cause and effect, and shows the futility of the analysis of a mentality whose functions are supposedly dependent upon a brain and nervous system to find a cause and remedy for fear. The writings and lifework of Mrs. Eddy prove conclusively that fear is not an entity or a power, but merely one of the numerous manifestations of the false material sense of life. All who adhere to Christian Science and strive to live it can overcome this illusion called fear in their daily affairs. 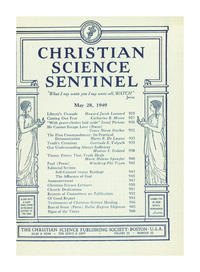