As a young girl of seventeen I...

It was several years later that once again Christian Science was brought to my attention, this time by my husband's mother, when I was incapacitated through recurring attacks of influenza and asthma. The healing of these conditions was not completed for some time. In the meanwhile I had become an earnest student of Christian Science, had joined The Mother Church and a branch church, and had had the precious privilege of class instruction. Through the uncovering of hatred for someone I believed I had justifiable reasons for hating, I was completely healed of both influenza and asthma, which materia medica, change of climate, and all manner of remedies had failed to heal. I then was ready to be of service in the movement of Christian Science and have since served in church activities.

Send a comment to the editors
NEXT IN THIS ISSUE
Testimony of Healing
In 1929 I learned of Christian Science... 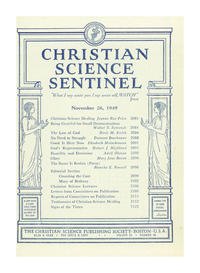