Pneumonia among many ills healed by Science

John Edward Milligan with contributions from Margaret A. Milligan

I am deeply grateful for Christian Science and for the work the practitioners are accomplishing and also for the periodicals, which helped to bring about my healing.

I have been an active student of Christian Science for some time. I served with the Royal Canadian Air Force during World War II. The following event took place while I was attached to the Royal Air Force and was stationed in the Far East.

Send a comment to the editors
NEXT IN THIS ISSUE
Testimony of Healing
Home is found when Ps. 90:1 is spiritually understood 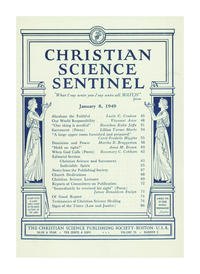