Too often one finds himself believing that a person is responsible for his troubles and that another person is necessary to cure them. Even the afflicted man at the pool of Bethesda did so, according to the record in the fifth chapter of the Gospel of John. The impotent man looked to another for his release and complained that because of interference by others he could not reach the healing waters. "I have no man, when the water is troubled, to put me into the pool," he declared, "but while I am coming, another steppeth down before me." Jesus rebuked his trust in matter and his parasitical attitude in three short, decisive commands: "Rise, take up thy bed, and walk." And we read that the man was immediately "made whole, and took up his bed, and walked."

Too often we are apt to place the blame for our inharmonious conditions on another's attitude and believe that the remedy lies in changing that one's thought and hence his actions. We may be thinking that a certain willful child must be controlled and made obedient, a husband made more considerate and solicitous, a friend or so-called foe more kindly. Thus our thought is centered on the belief that our difficulties are due to another's shortcomings, and that our release from them is to be found in rectifying his faults. 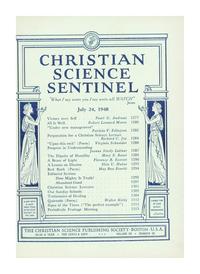