Even a casual reading of matters contemporary and historical discloses that the world is entering an epoch in which, as possibly never before, men's individual freedoms and personal rights are being subjected to violent assault. Free enterprise in business and independent decisions in legislation are being impaired by great mass pressures springing from organized groups which threaten the freedom of the body economic and politic.

In the world of military conquest, Nebuchadnezzar allowed the captive and transported Jews to flourish somewhat independently in industry and art. Even Genghis Khan, ruthless as he was, did encourage religion in his conquered domain, respect learning after a fashion, and institute legal safety for the people. Yet it remains for us of the present day to witness a widespread attack upon the individualism and freedom of men over large portions of the earth. War of a sort is still continuing as one state after another topples to totalitarian pressure. The individualism of nations as well as of persons is under fire. This spreading blight, dooming entire populations to serfdom, with its intellectual and spiritual decay, raises a challenging question to every thinking person today.

Send a comment to the editors
NEXT IN THIS ISSUE
Article
BEHOLD, I SEE! 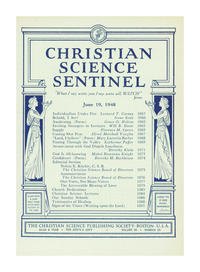