Remembering the eagerness with...

Remembering the eagerness with which, when I first became interested in Christian Science, I looked for the testimonies in each new Sentinel, I know that I have delayed too long in sending my own expression of gratitude for the help that Christian Science has been to me for nearly twenty-five years.

I had known of it for only a short time when my husband passed on. Our three boys were at school, two of them having attended only two terms at their public school. It looked as if it would be not only difficult but almost impossible for them to complete their education in the manner we had planned; but constantly recurring to me were these words from Psalms (37:25): "I have been young, and now am old; yet have I not seen the righteous forsaken, nor his seed begging bread." The way in which financial difficulties were smoothed away and a burdened sense of responsibility was lifted from me gave me a small insight into the multiplicity of ways in which Christian Science meets our human needs. I have had many proofs that in the measure that I have learned to put my sons in their heavenly Father's care they have been rightly guided and cared for.

Send a comment to the editors
NEXT IN THIS ISSUE
Testimony of Healing
Several years ago, through reading... 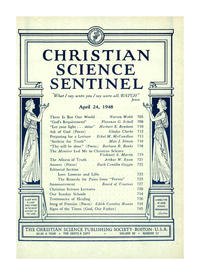