By establishing man's identity as the idea of God, Christian Science obliterates the scars of a so-called past. The Bible tells us that God is "of purer eyes than to behold evil" (Hab. 1:13). In the oneness and allness of the Mind which is God is no presence of evil, no recollection of it, and no mark to indicate that it ever was present. God is absolute good, eternal Truth, incapable of variation. He is all the Life there is, the one and only Being, and He includes within His own infinitude all that exists or ever has existed. That which expresses Mind or Spirit partakes of the nature of Mind and hence is wholly spiritual. The idea of divine Mind can no more get outside the orbit of Love's infinitude than God can cease to express His own nature.

The world believes itself to be passing through the aftermath of a great war; everywhere, according to belief, remain the scars of a great upheaval—in politics, in economics, and in individual lives. Yet in God's universe—the one and only universe—there has never been a moment when the order of Principle has been disturbed, when an element of evil existed or held sway. Because God is Life there is but one Life, and there never has been a life to be blighted. Because God is Mind there is but one Mind, and there never has been a mind to be shattered. In the infinitude of Love are no haunting fears, no shock, no resentment, no hate, no hallucinations. In the clarity of Truth is no lurking error. Truth leaves no scar of remorse, self-condemnation, grief, or hurt. The idea of Mind, dwelling forever within the Mind that is infallible, has never lapsed from its inherent state of conscious perfection and undisturbed harmony. The omnipotent spiritual fact that good is omniaction leaves nothing to scar or be scarred. 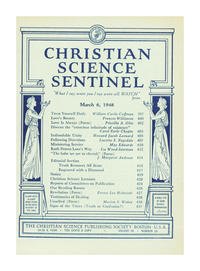