In the years since I began its...

In the years since I began its study, Christian Science has been to me a staff upon which I could lean in times of trouble. When difficulties have presented themselves, I have at times turned to a kindly practitioner, who patiently listened and brought the needed spiritual uplift and freedom from the mesmerism. However, more often I have been able to stand firm and help myself. I have had friends ask me what sustained me through some trial which I had dealt with alone in Science, I could truly make this statement: "I was never alone for one minute, because God is omnipresence, and I relied upon that knowledge."

My first healing took place many years ago when I was in complete ignorance of what Christian Science really is or even what it can do. Someone had told me that it could heal me of the difficulty from which I was then suffering. When I asked how it could be done, the reply was, "Through prayer to God." This appealed to me, and I asked that a practitioner be called, I was healed completely in one visit. The first thing I learned was that God is ever present. I shall never forget the feeling that came over me when the practitioner made that statement. My sense of God at that time was that He was as distant as the North Star. The positive, understanding tone of her voice comforted me, and the realization of His presence filled me. When I next thought of the practitioner, she was gone and I was without pain. The sense of His nearness that I gained is still reassuring to me. Many times since, I have found statements in "Science and Health with Key to the Scriptures" by Mary Baker Eddy which explained God's ever-presence.

Send a comment to the editors
NEXT IN THIS ISSUE
Testimony of Healing
For about twenty-seven years my... 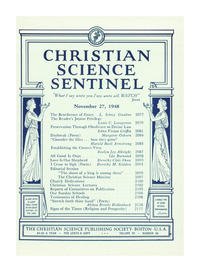