In the daily practical application of Christian Science any incident which promotes individual spiritual growth may be looked upon as a steppingstone in one's spiritual ascent to the goal of life eternal. One may recall a youthful adventure in making his way on steppingstones over a turbulent stream or muddy river bed. He reached some stones with little apparent effort, while he viewed others with trepidation, and doubt of his ability sometimes tempted him to turn back. Then perhaps a less fearful companion who had already reached the distant bank encouraged him to keep on trying, with the result that his efforts were also crowned with success.

One's first healing may constitute the first steppingstone in his spiritually ascending pathway. Then if the student is earnest and perseveres in his efforts to prove what he learns, he encounters other experiences which promote individual progress in exercising his God-given dominion over matter or evil. As he attains some degree of spiritual understanding, he recognizes that Truth's healing power is quickly evidenced when his thought is poised in the consciousness of God's allness and supremacy and of man's oneness with Him. 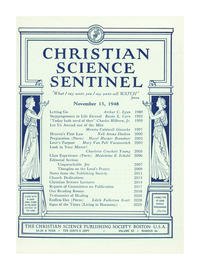