I have been interested in Christian Science since 1898 and a member of The Mother Church since 1902. Science has meant so much to me in restoring normal conditions that I wish I could help someone.

I had been interested in a Protestant church all my life and became a member at sixteen years of age, taught in the Sunday School, and was active in different departments. Through my school days, if anything troubled me, I always resorted to the Bible and there found a never-failing promise to heal. In ten years of business life it was the same. Then married life came, and after we lost our first child at one year of age, I was troubled with insomnia. I knew that it was not God who had caused this trouble, for I knew that He is Love; but explain the phenomenon I could not. I felt that I must know, and I prayed earnestly about it. In two weeks I was guided to learn about Christian Science. I was healed when first reading "Science and Health with Key to the Scriptures" by Mary Baker Eddy. Being a "key" to the Scriptures, it explained all phenomena, and I realized that Christian Science is the Comforter which Jesus promised God would send into the world. It healed our children of childhood diseases, twice saved my husband from passing on when doctors had given him up, and I have depended upon it wholly. 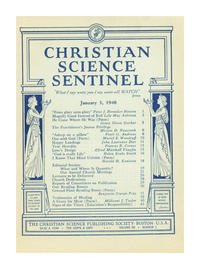