The Bible records many wonderful healings which are dear to all students of Christian Science, healings of many types of error. One of especial interest and potential enlightenment is recorded in the fifth chapter of Mark, beginning with the twenty-second verse.

Jesus was requested by one of the rulers of the synagogue to come and heal his young daughter, who was seriously ill. As Jesus was going with him, a multitude of people "followed him, and thronged him." In this multitude was "a certain woman, which had an issue of blood twelve years, and had suffered many things of many physicians, and had spent all that she had, and was nothing bettered, but rather grew worse." 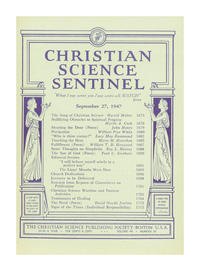