Chief among those qualities which accelerate the progress of the Christian Scientist on his journey heavenward is that of obedience. That Mary Baker Eddy considered it of vital importance is proved by her article devoted to the subject and published in "Miscellaneous Writings" (pp. 116— 120). Christian Scientists would do well to read this message from their Leader and ponder its meaning, weighing their own obedience against the high standard set forth therein.

The test of obedience is love. How much do we love? Are we willing in every instance to subjugate the human to the divine, that we may uphold the standard of Truth for those struggling in the darkness of sin and disease? Self-love and self-justification argue loudly for their right to speak, and pride rebels stubbornly when the false sense of self is forced to yield to the demands of divine Principle, but sweet is the purified sense which follows such self-surrender. The warfare is ever with that false claim of a selfhood apart from God which must ultimately be wholly laid upon the altar. "Insubordination to the law of Love even in the least, or strict obedience thereto, tests and discriminates between the real and the unreal Scientist," our Leader says (ibid., p. 119).

Send a comment to the editors
NEXT IN THIS ISSUE
Article
"BUT ME NO BUTS!" 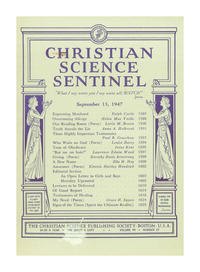