One day when Jack was twelve years old, he was suddenly stricken with a very painful disease. In the Christian Science Sunday School he had been taught the basic truth that God's child is spiritual and perfect. Now he had to prove this truth by solving this, his first seemingly big problem.

The name attached by mortal mind to the symptoms of this illness, and the discouraging beliefs generally felt and voiced regarding its possible effects, tempted Jack and his parents to believe they had something real to overcome. Also, the pain seemed to move about in such a novel way that it was hard for Jack, who was unable to walk, not to think of it as something real, something with intelligence and dread power.

Send a comment to the editors
NEXT IN THIS ISSUE
Editorial
Are You Happy About Church Attendance? 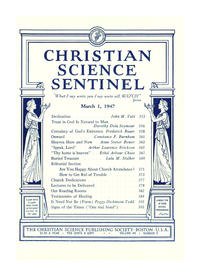