In the Old Testament, in the fifth chapter of the second book of Kings, is related the story of the healing of Naaman by Elisha the prophet. We are told that Naaman, a captain in the Syrian army, "was a great man with his master, and honourable;" that "he was also a mighty man in valour, but he was a leper."

Like countless others who have been faced with the pronouncement of hopeless physical disease, Naaman was forced through desperation to make an important decision. Was he ready and willing to "go and wash in Jordan seven times," as Elisha directed? Not at first; but gradually his resistance to the demands of the prophet yielded to the persuasions of his servants. 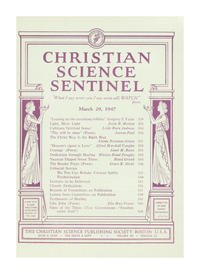