Some years ago my wife and I...

Some years ago my wife and I attended a lecture on Christian Science and came away convinced that we needed the way of life which this religion taught. We judged this by the expressions on the faces of the people present and by the health and happiness they manifested, for we thought we did not understand much of what was said. The following Sunday we were in church, and we have attended faithfully ever since. Within a year we had joined The Mother Church and a branch church.

During the first four months of study I was healed of smoking, drinking, gambling, loose talk and profanity, influenza, sinus trouble of ten years' duration, and bronchitis of thirty years' standing. I gained fifty pounds, achieving what is termed normal weight for my height for the first time in my experience. A deep gash on my scalp was healed in twelve hours. Before retiring I could not get a comb through my hair. When I arose the next morning, there was not even a mark upon the scalp. It was such an outstanding experience that my wife and I knew we had been touched by the presence of the Christ as surely as those who stood on the shores of Galilee in the days of Christ Jesus. Since we were such neophytes in our study, we had learned little of what is called treatment, but we knew that God is good and He is All; that was enough. All the above healings were accomplished through just that simple realization. We have since learned that all our work resolves into that fundamental fact. 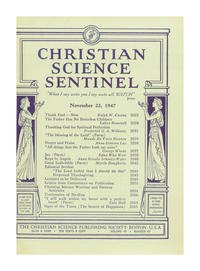