I always approved of Christian Science...

I always approved of Christian Science because of my brother, who accepted it soon after it was presented to the world, but I did not accept it for myself until many years later. At that time I had an attack of influenza. I was alone in the house except for my husband, who was very ill and was in bed on the second floor. I also had to care for the furnace. A Christian Science practitioner was called, and I accepted Science so gladly that I was given strength to do all that was required of me, and in two days I was entirely free. At the same time sick headaches left me, never to return. I was then sure I had found what I had needed all my life.

My first demonstration as a result of my own work was over a hornet's sting. I looked at the hornet and thought, if God has healed me once He surely will again. I brushed the insect off and went on with my work; the pain stopped at once, and when I went into the house a few minutes later there was no indication of the sting. The next healing was of eczema, which I had had at times since I was nine years old. When the condition reappeared, I used my knowledge of Christian Science for several days, but without results. Then I said to myself, If God healed me once He can and will again. I said, "Dear God, I have done all I know how to do, now I leave it all to You." The itching and burning stopped at once and the redness went away, and in a few minutes the spots had all disappeared, never to return. The same was true of hay fever, which, I had had for fifteen years. When I fully realized God's presence and power, I was healed permanently. 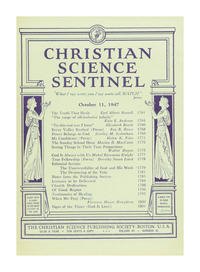