As the result of an accident in...

As the result of an accident in 1935, it became necessary for me to be hospitalized. A series of X-ray and fluoroscopic pictures disclosed the following: an unsuspected prenatal "hunchback" stomach located in the upper chest cavity; a double diaphragmatic hernia, and a short esophagus, all of these greatly aggravated by the accident. In a bedside examination the doctors also found something wrong with the left hip.

Upon completion of the examinations and consultations, my own doctor, upon my insistence, reluctantly told me what had been found, stating that my suffering would be beyond human endurance and would necessitate the increased use of drugs. At this point I told the doctor that I felt sure Christian Science would heal me. I had been healed in 1913 of a lung condition and of synovial tuberculosis after the doctors had stated that a leg amputation was imperative. To this the doctor replied, "Not this time; it's impossible; neither God nor man can do anything for you."

Send a comment to the editors
NEXT IN THIS ISSUE
Testimony of Healing
As an expression of my deep... 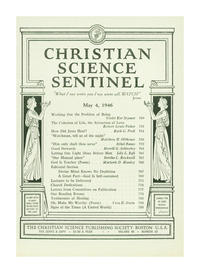