Small events are often the forerunners of discovery. In the realm of physics the falling of an apple led Isaac Newton to his discovery of the law of gravitation. In the realm of metaphysics a large measure of spiritual freedom was unfolded to the writer through just such a small event, interpreted in the light of Christian Science.

One evening while driving home she noted that the route habitually taken was closed to traffic because of road repairs. There was an alternative route well known to her but hitherto always avoided. Some fifteen years before she had endured a crushing and humiliating experience in a home on that street, and now there was again the temptation to take a wide detour to avoid driving past it. Although harmony had long since been restored, the healing had evidently never been completed in her own thought; else why this reluctance now? Deliberately, she headed her car down the street while she thought the experience through. The moment had come for the last vestige of error—its remembrance—to be destroyed.

Send a comment to the editors
NEXT IN THIS ISSUE
Article
How Can I Be Sure? 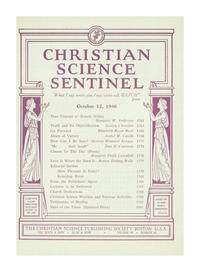