"The breastplate of righteousness"

Landing in Normandy at the time of the invasion, a young soldier who had been a pupil in a Christian Science Sunday School, and had also served as a newsboy selling The Christian Science Monitor, was wounded by a shell fragment. While he was being helped by a comrade to a place of safety, a sniper tried to shoot him through the heart.

The soldier carried with him in the breast pocket of his coat some snapshots of his home folks, a paper-covered copy of the service Hymnal, and also a service edition of the Christian Science textbook, "Science and Health with Key to the Scriptures" by Mary Baker Eddy. The bullet passed through the snapshots, the Hymnal, and part way through the textbook, and then glanced off seriously wounding his right arm. On being sent to a hospital in England, the young man was happy to make the acquaintance of another young man, who was also a Christian Scientist, and who was able to be of much service to him. Naturally, the young soldier felt a great sense of gratitude for his protection from the bullet of the sniper, and also for the spiritual help which his friend could give him. 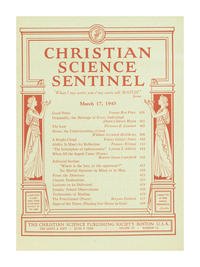