I became interested in Christian Science through the healing of my grandmother, who, when well past eighty, fell and broke her hip. This left her right leg paralyzed from the hip down and the foot twisted. On hearing of Christian Science she sought treatment from a practitioner and in about a week she was completely healed. She lived to be nearly one hundred years old, and had the use of her leg and foot to the end. My mother also was healed about this time of a chronic heart ailment.

My husband and I desired to learn how these healings were accomplished and began to read "Science and Health with Key to the Scriptures" by Mary Baker Eddy. Almost immediately we were healed of constipation, for which we had long taken medicine regularly. The tobacco habit fell away from my husband, and many other erroneous conditions were healed. A relative who was very much opposed to this study remarked that our dispositions were also much improved.

Send a comment to the editors
NEXT IN THIS ISSUE
Testimony of Healing
"I waited patiently for the Lord;... 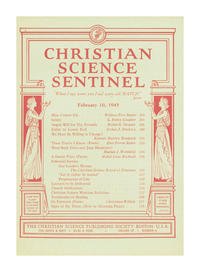