The many helpful testimonies...

The many helpful testimonies given in the periodicals impel me to express my gratitude for the encouragement and support I have received through the loving assistance of Christian Science practitioners and from my daily study of the Lesson-Sermon.

From boyhood I was confronted with sickness, failure, and fear about the future. After leaving my native land of Sweden, I was operated on in the United States, but without apparent improvement in my condition. The woman with whom I was boarding at the time inquired whether or not I had tried Christian Science treatment. This was the first time I had ever heard of it, and I was rather skeptical when she tried to explain it to me. Willing to try anything, I went the next day to a Reading Room and borrowed "Science and Health with Key to the Scriptures" by Mary Baker Eddy, to find out more about Christian Science. I had not finished the first chapter before I realized that I had found the Comforter, and it was with a feeling of hopefulness and satisfaction that I closed the book late that night.

Send a comment to the editors
NEXT IN THIS ISSUE
Testimony of Healing
With a heart full of gratitude to... 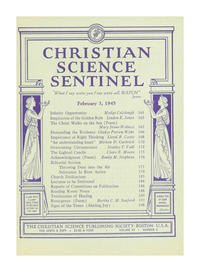