A few years ago I attended a...

A few years ago I attended a Christian Science lecture in a near-by church. For many years previous to this time I had suffered almost constantly from an itching on my body which at times seemed unbearable. It occurred at the most unexpected times, and I was almost afraid to go anywhere.

During the lecture I received relief, and three days later I realized I had been completely healed. 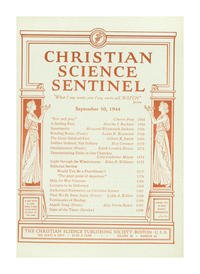