A young man stood facing a mob of angry people. Stephen it was, one of the early Christians. Gallantly he had defended himself against the charge of blasphemy before the council, the tribunal of justice established for such a purpose, but the council had failed to heed his words or to understand his plea. So, around him on this tragic day in old judea, so long ago, the people had gathered, their hearts filled with intolerance and hate. And there, swayed by the mesmerism of mob action, they proceeded to stone him to death.

Not all actually threw the stones. Some of them, no doubt, either by their presence and lack of protest or by their active encouragement, merely consented to the cruel deed. Saul of Tarsus was one of these—he who afterwards became the great Christian apostle and himself a martyr. "When the blood of thy martyr Stephen was shed," he is recorded as saying, I also was standing by, and consenting unto his death, and kept the raiment of them that slew him." 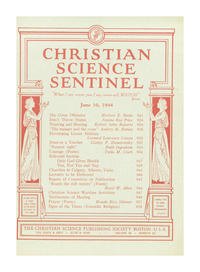