"The place whereon thou standest is holy ground"

A Busy Christian Scientist, feeling the need of a change and rest, thought of several places she might go for her vacation, and decided to take a train to a certain resort. That day she met a young soldier home on furlough who reported that he had stood in the crowded aisles of their homecoming train for hours. So instead of using the train, she decided to go by automobile to visit friends in the mountains. That evening a commentator on the radio spoke of the vast quantities of gasoline needed for our armed forces at home and across the seas, and the idea of driving was abandoned.

Just then the words from the Bible came to her. "The place whereon thou standest is holy ground." Right where she was were holy thoughts knocking for admission into her consciousness. These would bring her rest and comfort if she would let them. She did not have to travel anywhere; she had only to change her thinking, for she realized that unless she healed herself of weariness, boredom, discontent, or strain, her trip might bring only temporary relief. The words of Mrs. Eddy from page 519 of "Science and Health with Key to the Scriptures," "God rests in action," then came to her. As she pondered these messages from the Bible and our textbook, it became clear that her need was for tranquillity of thought, rather than for change of scenery or environment. Since "God rests in action" and knows nothing about material modes of transportation, she could rest in action, the activity of spiritual thinking, which is at peace because it is born of Truth and Love and has no taint of materialism in it. 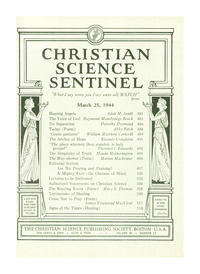