Do You Want God?

"Do you want God?" is as arresting a question as, "Do you want the multiplication table?" Whether you want the multiplication table or not, it is here. You have nothing to do with making and maintaining it but you have much to do with acquainting yourself with it and using it. A similar figure may be used on a much higher level. God is— whether we think we want Him or not. We have no more to do with making and maintaining the relationship between God and man than we have to do with making the multiplication table, but it is a pitiful thing for us if we do not seek to understand that relationship and utilize it. How wild would be the mathematical calculations and how collapsible the work of the engineer who scorned the principle of mathematics! How futile are the life purposes of him who tries to live without God!

A young college man who was profoundly interested in his chosen profession turned to Christian Science for light and visited a Christian Science practitioner. He said he was disturbed by his indifference toward religion. He felt that he ought to desire to know something of the truth about God and man, but frankly he thought that he wanted professional success more than he wanted God. He said that certain religious pictures which represented God as an old man with a long beard, sitting on a cloud, had offended his intelligence. He felt that he could not accept that kind of God; but what kind of God was there? What kind of God did he want? He was assured that he need not be lonely in his quest, for every thinking individual somewhere along life's highway stops to ask similar questions and looks for signs directing him to his spiritual destination. 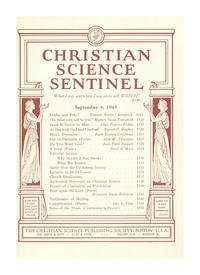