Those who live within sight of the mountains often come to look upon them as reassuring symbols of eternity amid the changes of human life. The sunshine of a clear day may light up their green depths, evening may throw their peaks into purple relief against the sky, or driving rain may blot them out for a time, but, however their appearance may alter, the do not change appreciably from year to year. In bad weather no one ever doubts that, invisible behind the rain clouds, they stand where they have always stood. The tide of battle has rolled through their passes, but the mountains remain.

So, in times of war especially, men look for reassurance to the hills, which have seen many wars come and go. It is an instinctive turning toward the immutable and eternal. How comforting, then, is the realization that there is something which we know to be eternal and immutable, even as the hills are not: Truth itself. There was a time when even these giants had not been formed; but at that time Truth was no older and no younger than now. 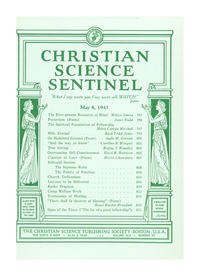