The Door of Willingness

A Kaffir boy, employed as a household servant in a South African home, had a superstitious belief about the sun. He believed that when the sun disappeared at night, a very big bug ate it up, and that a new sun came up the next morning. His mistress took some oranges, and using one for the sun and another for the earth, explained to him how the earth turns on its axis every twenty-four hours, and that when it turns away from the sun, we cannot see the sun, but when it turns back again, it is the same sun that appears. Nothing has happened to the sun. The boy seemed to understand, but when the explanation was ended, he said, "Missus, you are always good to me, and you always tell me what's true, missus, but please, missus, when the sun goes down at night, a great big bug eats it up, and a new sun comes up the next morning."

The truth that could have destroyed the Kaffir boy's ignorant, superstitious belief was there, right at the door of his consciousness, but it could not get in. Why? The door was closed by a blind, ignorant mental force called unwillingness. Mary Baker Eddy recognized this quality of ignorant evil as responsible for the continuing bondage of mortals. She says that "unwillingness to learn all things rightly, binds Christendom with chains" (Science and Health with Key to the Scriptures, p. 96).

Send a comment to the editors
NEXT IN THIS ISSUE
Editorial
Who Is Outlining? 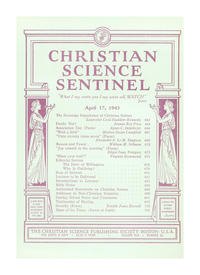