"With authority and power"

In the seventh chapter of Luke's Gospel is found the familiar story of Jesus' healing of the centurion's servant. It will be remembered that after the centurion had asserted his faith that his servant would be healed if Jesus would say that it should be so, he added these significant words: "For I also am a man set under authority, having under me soldiers, and I say unto one, Go, and he goeth; and to another, Come, and he cometh; and to my servant, Do this, and he doeth it."

That military man evidently realized a most important fact about the power of Jesus. He saw that even as he was set under a superior officer in the army from whom he derived his own authority, so Jesus, owing allegiance only to God, derived authority from Him to overcome all material conditions, including disease. The soldier may have thought that his power and authority were given him by a special act of God, not realizing that Jesus was revealing and using the power of God which was available for everyone to use. Christ Jesus was conscious of his relationship to God, of his true identity as the expression or Son of God, all-powerful Mind; and this spiritual understanding enabled him to do what he did. 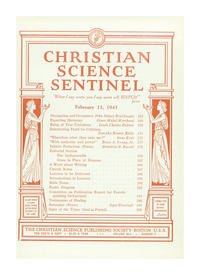