Enlistment for a Holy War

Youth has long been credited with restless idealism. This attitude frequently seeks expression in supporting some appealing cause—if involved with excitement and adventure, so much the better. It may be said without any irreverence or braggadocio that Christian Science is the greatest adventure in the world today. Exploits on land and sea and in the air, performed in the service of the nations fighting to maintain human freedom, are noble and of great value; but ultimate and lasting victory can be attained only in the light of the truths revealed and proved by Christian Science. For the final warfare is not against certain aggressor nations or classes, but against false thinking, false concepts, false desires, lies about God and man and true values. It is directed against the so-called kingdom of evil—belief in mortal mind or matter, with its sickness, disease, sin, poverty, death; for human warfare, however couched in terms of politics, economics, dynastic ambitions, or racial antagonisms, always reduces to this basic enemy.

Mary Baker Eddy saw this clearly and wrote (Science and Health with Key to the Scriptures, p. 450), "The Christian Scientist has enlisted to lessen evil, disease,and death; and he will overcome them by understanding their nothingness and the allness of God, or good;" and on page 29: "Christians must take up arms against error at home and abroad. They must grapple with sin in themselves and in others, and continue this warfare until they have finished their course." 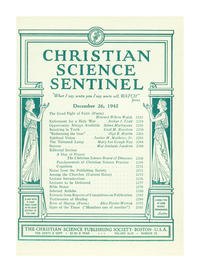