[The Biblical citations given in the Christian Science Quarterly are from the Authorized King James Version. The Bible Notes in this column can be used, if deemed necessary, to elucidate some of the words or passages contained in the Bible Lessons. The Notes in this issue are related to the Lesson-Sermon designated to be read in Christian Science churches on September 7, 1941.]

"Behold, what manner of love the Father hath bestowed upon us, that we should be called the sons of God" (I John 3:1)—The three best-known manuscripts of the Greek New Testament add at this point the Greek words "kai esmen," which were not rendered by the translators of our Common Version, but appear to make the meaning of the verse even more definite. The words mean "and we are," and so the sentence reads, "... that we should be called the sons (literally, 'children') of God, and that is what we are." This reading is accepted by most modern translators.

"A good man sheweth favour, and lendeth" (Ps. 112:5)—The Hebrew phrase which is thus translated permits of the alternative rendering favored by the American Standard Version: "Well is it with the man that dealeth graciously and lendeth." Smith suggests: "It is well with the man who is a gracious lender."

Send a comment to the editors
NEXT IN THIS ISSUE
Testimony of Healing
While I was visiting in Seattle nineteen years ago, a... 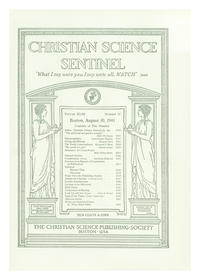