Victory! What a wealth of confidence and satisfaction that word conveys! All the world is seeking it in some form, but to attain it one must understand its true meaning. A dictionary defines it in part as, "Gain of superiority in any struggle."

Interpreted in the light of Christian Science, victory is the understanding of God's superiority, His all-power. The only struggle is the struggle with a belief in a so-called power called devil or evil. As soon as error is recognized as illusion, a false suggestion, unreal, the struggle is over and victory is won. 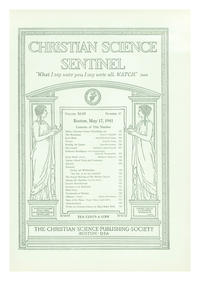